VAPEXPO Kiev: the continuation of Virgin Vape’s story in the interview with its representative 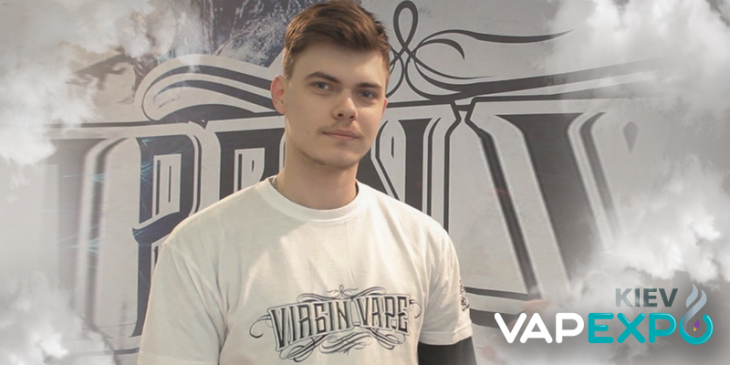 Avid vapers are interested not only in new vaping products but also news from the world of vaping in general, be it the launch of a new vape shop or the latest version of TPD. It’s like a new season of beloved TV series, when you are waiting for continuation. For example, those who read the interview with a representative of Virgin Vape are waiting for new details: how things are going with the new flavor and whether guys opened a vape bar.

That’s what we found out at VAPEXPO Kiev 2017, where we had a chance to talk to the owner of Virgin Vape Andrei.

D. K.: Andrei, will you please share your impressions of VAPEXPO Kiev 2017?

A.: I have vivid impressions: many people, including foreign guests. It’s pleasant that they are interested in our products and look for suppliers in Ukraine. It’s also nice to see many foreign manufacturers, for example, Innavape (read the article with the founder – author) and Wotofo. And it’s cool that Vape Alliance is here!

D. K.: Last time you talked about the extension of the line. Have you presented it?

A.: Yes, today (at VAPEXPO Kiev 2017 – author) we have presented a new e-liquid – Senator. People liked the flavor, and shops order it.

D. K.: Will you tell more about the new e-liquid?

A.: Senator has a flavor of tea with oranges. At Ukrainian Vape Week, organized by Smile-Expo, we gathered data and learned that people want to try something sour. Afterwards, we started to elaborate the new mixture and finally released it.

D. K.: And how are things going with the opening of vape bar?

А.: Good. We have launched it in the test mode, have been working for three days now, and have happy customers. The official opening is scheduled for April.

D. K.: Thanks for the interview. Good luck!

P. S. The interview took place on March 4. On April 22, guys officially presented their vape shop and bar Imperium Vape Shop&Bar in Odessa. The press-service of VAPEXPO is genuinely glad for Andrei and his team and wishes him the best of luck. By the way, soon you will be able to find out how things are going for Virgin Vape, as on July 1 Ukrainian Vape Week will take place in Odessa! Follow the news – the registration will open soon! And meanwhile, we suggest that you attend the jubilee vape exhibition VAPEXPO Moscow 2017 that will open the summer time season on June 16–18. Buy a ticket!

P. P. S. Vape events are organized by Smile-Expo company that long ago took the lead in the organization of vape events in European and CIS countries.