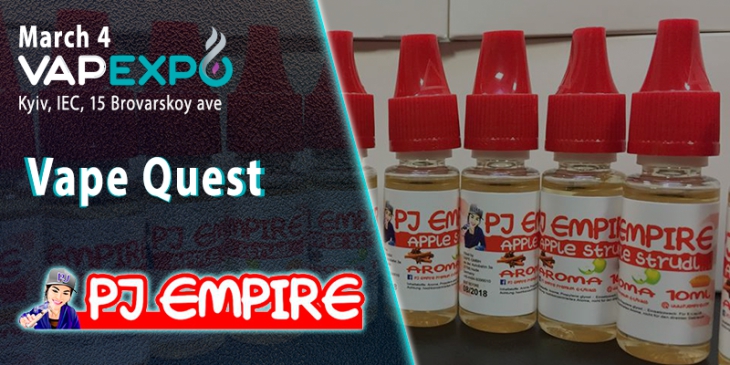 Don’t fall asleep after the first Vape Quest, because on March 4 at VAPEXPO Kiev 2017 you will be able to win in another vape quest from Austrian company PJ Empire!

Brand was founded for every vaper to refill his electronic inhaler only with the best e-liquids that will provide seamless and smooth vaping. VG and PG ratio ranges from 65:35 to 80:20. Only 0.3 and 6 mg nicotine concentration is available. “There shouldn’t be more of it,” believes the company’s founder.

Austrians have prepared an exciting challenge at VAPEXPO Kiev 2017:

Three participants, whose posts will get the biggest number of likes, will become the winners. The luckiest will receive a set of delicious premium e-liquids from Austria!

We would like to remind that quests will be announced on the stage on March 4 at 12:00, and the winners will be awarded at 18:30. You have plenty of time to win!

PJ Empire will be nominated for The Best Foreign E-liquid Manufacturer as part of Vape Awards. Give your vote for guys if you like their products.

Register for VAPEXPO Kiev 2017 and go for it!