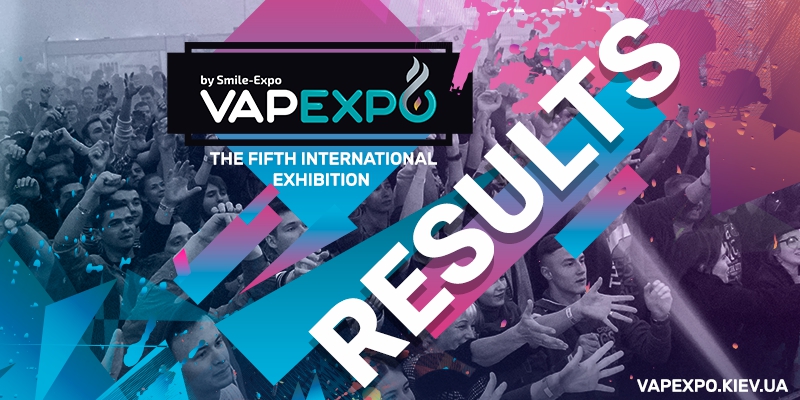 Just imagine that you are sitting at a table with built-in devices and playing vape monopoly with friends. Nearby somebody from your clique is doing a crossword puzzle about vaping printed on the last page of a vape magazine.

No, that is not just fertile imagination! That is a typical picture of two days at VAPEXPO Kiev 2018, the most spectacular vape exhibition in the country! The event took place in the Kyiv-based International Exhibition Centre on April 14-15, brought together 3000 attendees, gave away $1200, and presented an uncountable number of prizes.

Both Ukrainian and foreign companies met at the platform, including representatives from France, Italy, Russia, Belarus, and the US. Besides, Turkish manufacturers entered the national vape market for the first time.

“This year, we started to work with Ukraine and hope that we will succeed,” the representative of Kaniza Vape commented. “We see a huge potential in the Ukrainian vape industry”.

Representative of the e-liquid manufacturer The Collection shared her impression of VAPEXPO Kiev 2018:

“I am delighted! I did not expect that there would be so many people and questions. The most interesting thing is that there are people that can share their knowledge. In the same way as we can show something, explain, make presents, and work with someone, somebody can help us. Many experienced vapers approached us and said, “Please, mix this flavor with that one”, “I have such a crazy idea – will you implement it?”, and our executive director was delighted with the kind people that attended the event.”

Ukrainian companies also brought joy with new products. For the first time ever, Monster Flavor presented an e-liquid line developed in collaboration with the popular presenter Anatoly Anatolich. By the way, the line has the same name as his program The Interviewer, and flavors have the names of its rubrics: Business, Sport, Travel, and Music. Anatolich attended the presentation and gladly talked with guests. New e-liquids were thrown from the stage of VAPEXPO.

Another exclusive thing was the presentation of the first Ukrainian printed magazine about vaping titled VapeReality. Useful articles about vaping, special offers from manufacturers, interviews, and even crossword puzzles make up 160 glossy pages of top-class content coupled with e-liquid testers – that is how the product looks like. Everyone could read and buy the first edition, which was also awarded to the winners of the vape contests.  This award was presented by the founder and editor-in-chief of VapeReality Denis Manushevich.

Vape Monopoly is an exclusive product not only in Ukraine but also in the whole world! The company shifted the focus of the iconic table game to the vaping industry. Over two days of the exhibition, attendees tried themselves in the role of vape monopolists at the company’s booth.

Vape table – a product developed by designers of HAF – is another gem of the exhibition. The table has devices embedded in corners.

Loads of new and top flavors as well as merches and other vape accessories are common things for VAPEXPO Kiev.

VAPEXPO Kiev once again offered the cloud chasing championship World Series of Vaping (WSOV) and Coil Build Contest, and the Trick Contest was a new thing!

• Andrey Shnaider – in the category Men’s Cloud Contest up to 80 kg;

Guys received presents from sponsors and $300 each from organizers.

Yury Makedonsky was chosen as the best vape tricker and received a branded SRT17 box mod for his skills. After the contest, he admitted that all participants performed excellently and it was hard to win.

By the way, artful vape tricker and seasoned coil builder Tony Tornado was one of the jury members during contests. Apart from being a judge, he demonstrated cool coil builds at his booth, held a workshop, and answered all questions.

Already familiar Vape Awards ceremony was also upgraded: this time, the best flavor was chosen not through online voting among the website’s attendees, but through real testing by attendees of the event! Over two days, everyone could test the nominated e-liquids in the special testing zone, bottled in similar bottles without labels and chose the number of the flavor they liked. At the end of the second day, results were announced at the stage of VAPEXPO:

The organizer Smile-Expo thanks everyone who assisted in the organization of the updated VAPEXPO Kiev 2018, and in the first place:

• partner of the lounge zone – YoVape;

and, of course, attendees of the exhibition thanks to whom vaping exists.