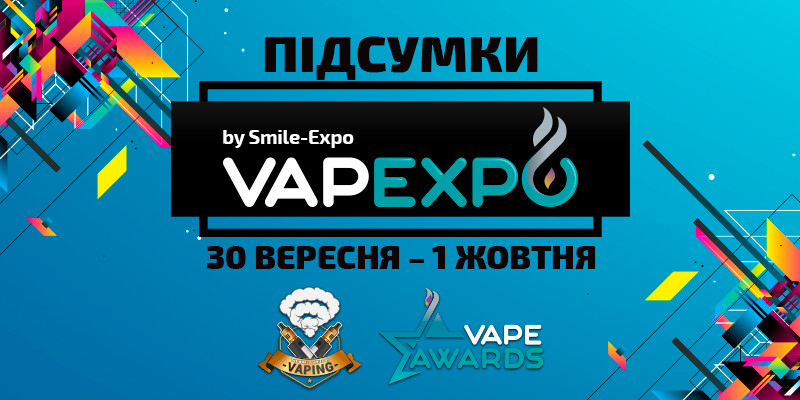 Well, guys! On September 30 and October 1, the international vaping event VAPEXPO Kiev for the fourth time took place in Ukraine capital at International Exhibition Centre. It was held by Smile-Expo, the organizer of largest vaping exhibitions all over CIS and Europe.

The vaping market was represented by not only Ukrainian leading manufacturers but exhibitors from Italy, France, Switzerland, the UK, the U. S., Belarus, and Russia also. For some of them, it was the first experience in Ukraine.

‘Foreign companies are actively integrating in the Ukrainian vaping market due to the openness of official distributors. They are interested in cooperation,’ noted the exhibition curator Miroslava Buzikevich.

At the main stage of VAPEXPO Kiev 2017, a bright show pleased visitors.

The key point of the event was World Series of Vaping that decided the winners in four categories:

Supreme champions of all contests gained $500, silver winners of Cloud Contest Men’s – customized mechanical mod Saratov 17 with an engraving VAPEXPO from the manufacturer as well as a mechanical mod with an RDA from Vaperz Cloud presented by VAPEHOUSE.RU. The bronze winners got mechanical mods from Axiohm Mods Ω.

In the meantime, Vape Alliance stars held a real trial of manufacturers and reached the vaping verdict: on the event floor, vaping bloggers assessed taste, composition, label and even e-juices names. The developers voiced their opinion on the verdict.

Vapor was not the only flavor! At the specially decorated zone, everybody could play Beer Pong. No one failed: contestants had a whale of time and satisfied their thirst with qualitative live beer.