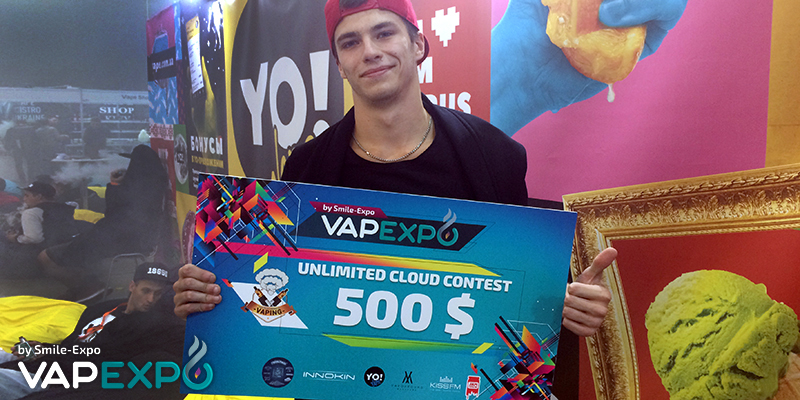 Vape enthusiasts from different countries and cities visit VAPEXPO Kiev year after year. People come here not only to show their products, communicate with other companies, but also to participate in vape contests. Every other event hosts more and more participants.

There were four Cloud Contests as part of The World Series of Vaping at autumn VAPEXPO Kiev. We spoke to Unlimited Cloud Contest winner, and Cloud Contest 2nd place winner, Ilya Makurin, about his secrets of victory and impressions after participation.

VAPEXPO: Ilya, tell us about your feelings after the victory?

IM: I'm a little bit shocked. I was concerned before the competition, because I was ill. I was afraid of choking, and that it would not work out. But I made it and I’m glad!

VAPEXPO: What kind of e-juice and mod did you use?

IM: Of course, I chose YoVape e-juice, which I represent at the exhibition. My devices are Vaperz Cloud VCM and a Mason drip tip.

IM: I participated in the Cloud Contest (80 kg) with another device yesterday, where I was second. I lost in the finals because I choked on vapor.

I got a new VCM for the second place. I thought I could try to do something with it. It was interesting what the device is capable of, so I chose it to participate in Unlimited Cloud Contest. It was an experiment and it was a success.

VAPEXPO: How often do you participate in vape contests?

IM: I come from St. Petersburg, so I try not to miss a single vape contest in Russia. I’ve attended VAPEXPO SPb and almost every VAPEXPO Moscow.

I took part in 10 contests in my entire life and only once or twice did not get prize. Now I take a shot wherever possible.

VAPEXPO: Why did you start vaping?

IM: I am keen on vaping since I was 15 years old. Now I’m 20. Therefore, I have been doing this for 5 years already. I smoked as a teen, and my mother was not happy about that. Honestly, I still fault myself for starting smoking at an early age. I switched to vaping, since it is less harmful and does not have such a strong smell. Then I started visiting exhibitions, participated in competitions, and was interested in studying coils and devices. By the way, I had already held my coil building workshop at the exhibition yesterday.

VAPEXPO: Was it your decision to participate in vape contests?

IM: Guys from YoVape were the first to give me a push start. I really doubted before the first tournament, I thought I would just go on stage and make a fool of myself.

I was not prepared, but still I was second. I started practicing later to be better.

VAPEXPO: Why did you decide to join YoVape and not another company?

IM: I like both, the atmosphere in YoVape and their products. I want to promote them, join their team and work together. It is a cool team of 15 people. Moreover, I would even say that this is one big family. Everyone is very friendly.

IM: It is a top level event! Vaping industry in Ukraine is rapidly evolving. This event is huge, it’s bigger than in St. Petersburg, for example. I am sure I will come back here again! I really liked it here!

P. S. Find out who and how to beat Ilya in the first contest! Follow the news for more details about VAPEXPO Kiev 2017. We have prepared a whole series of interviews, e-juices reviews and many ​​other interestingness from the exhibition!