Winner of Cloud Contest WSOV: I was saved by the fact that there were two categories 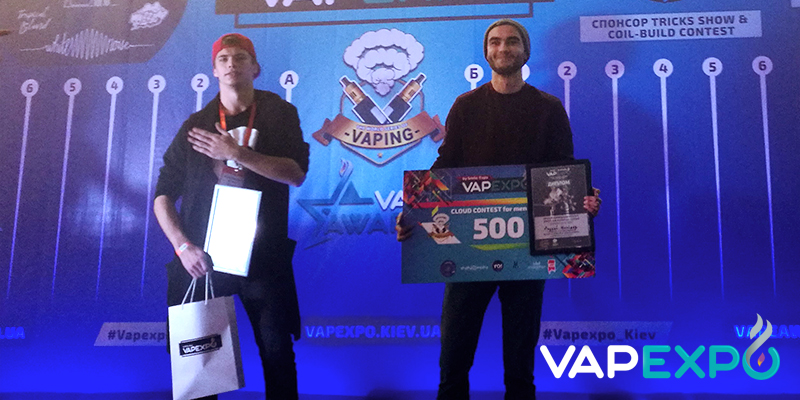 Cloud chasing championship World Series of Vaping has undoubtedly become one of the most expected, spectacular and exciting moments of VAPEXPO Kiev 2017! On September 30, guys competed for the title of the most powerful cloud chaser in two weight categories (up to 80 kg and over 80 kg) and a decent cash prize - $500!

Straight after the competition ended, the press service of VAPEXPO Kiev talked to the winner of Cloud Contest (up to 80 kg) Andrei Shnaider about the impressions of the victory and found out which device brought him overall recognition.

VAPEXPO: Andrei, will you please share your feelings connected with the victory?

A. S.: Frankly speaking, I have not expected to win. I have participated in the contest for the first time and won it at once! I think that the availability of two categories has helped me – many strong guys weigh a little bit more than I do.

VAPEXPO: Were you preparing for the contest?

A. S.: Yes, I was. Approximately two weeks prior to the championship, I started training in the evenings in my vape shop, when there were almost no people. By the way, it turned out that the participant of past contests trained me. Unfortunately, he did not win. As the saying goes, a student has outperformed his teacher (smiling – Ed.).

VAPEXPO: Which device has helped you to win?

VAPEXPO: And what about the coils?

VAPEXPO: Have you come to VAPEXPO for the first time?

A. S.: No, I attended VAPEXPO in spring and Ukrainian Vapor Week the last year.

VAPEXPO: And what are your impressions of the current exhibition?

A. S.: I have not decided yet – I have been preparing for the contest the whole day!

VAPEXPO: You mentioned that you owned a vape shop. Which one, unless that is a secret?

A. S.: Deep Drip Shop&Bar, located in Lviv. We opened less than a year ago and meanwhile things are going good.

VAPEXPO: Wish you good luck with the vape shop and new victories! Thanks for the interview.

P. S. Would you like to find out which device helped the winner of Cloud Contest (80+ kg)? And to read reviews of e-liquids, presented at VAPEXPO Kiev 2017? Subscribe to the news of the vape event!