Are vaping devices allowed on planes? Consultation from YANAIR’s engineer 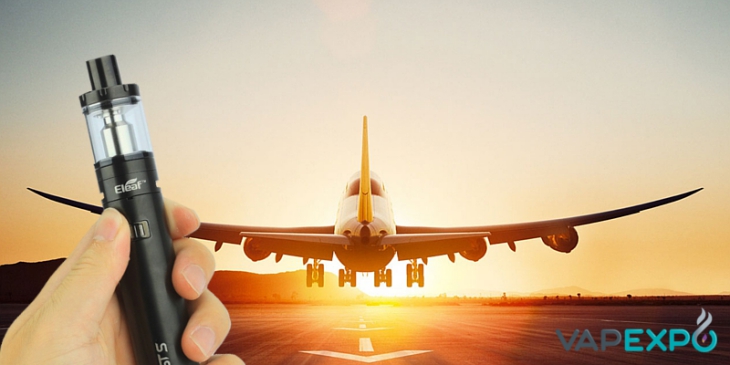 Travelling around the world is a hobby for many people, as it’s interesting and entertaining. But it’s important to find out all the nuances of your trip before leaving. With the growth of vaping another question was added to the list: is it allowed to transport vaping devices on planes? For a vaper without his device is like the Iron Man without his suit.

We talked to the head of the Technical service center for aircraft construction of YANAIR, Ukrainian airline company, Aleksandr Shevets. He explained how vaping devices can be transported on a plane, why there are restrictions on board and what waits for violators.

Vaping in the airport

Aleksandr shared his observations of the fact that the number of passengers with vaping devices has increased. Even before getting on a plane, literally upon entering the airport terminal, another question regarding vaping arises: is it allowed to vape indoors? The specialist told that there are “No smoking” signs in the international airports Boryspil and Kyiv (Zhulyany) – special areas are intended for that purpose. There are no separate signs that forbid vaping, but visitors don’t even think about vaping in terminal halls – they go to specially designated premises.

Vaping devices on board

Passengers go on board leaving the airport terminal. And here the question arises: is it allowed to carry vaping devices on board and how to transport them. It is widely thought that passengers have to take them on board, i.e. in hand-luggage, and cannot load them into the luggage compartment, alleging that electronic devices negatively influence the airplane’s operation, the battery can explode, and other versions.

Engineer explained that vaping devices and airplanes cannot be compared in terms of sizes; therefore the impact of electronics on airplane machinery can be neglected:

“Any electronic device – tablet, laptop, electric kettle – has no harmful influence on the plane, moreover when it’s turned off. The same can be said about vaping devices.”

Passenger decides for himself whether to carry his vaping device in hand-luggage or to put it in the luggage compartment. Passengers usually put the device in hand luggage due to its compactness. It doesn’t require much space, and it’s simply easier to take it with you, than to put it in a big suitcase.

Aleksandr also told about transportation standards for e-liquids: up to 100 ml can be carried at a time.

Vaping on a plane?

Many people might mistakenly think that electronic devices are taken on board because vaping is allowed during the flight. The specialist has dispelled this myth: vaping on a plane is forbidden during the take-off, the flight and landing.

Planes are equipped with special smoke sensors (toilets have them as well) – a fire alarm system. It is very sensitive and sets off due to both smoke and vapor, even a small quantity of it. The crew warns passengers about it beforehand, and asks to refrain from vaping on a plane.

If a passenger decides to refresh himself, setting off the smoke sensors by vaping, he has to be ready for:

According to the findings of the conversation with Aleksandr, it is clear that it is allowed to transport vaping devices on a plane, and it’s even not obligatory to hide the device deep in your luggage. But in case a passenger is an extremely active vaper, it will be better for him to put the device in the luggage compartment to avoid temptation.