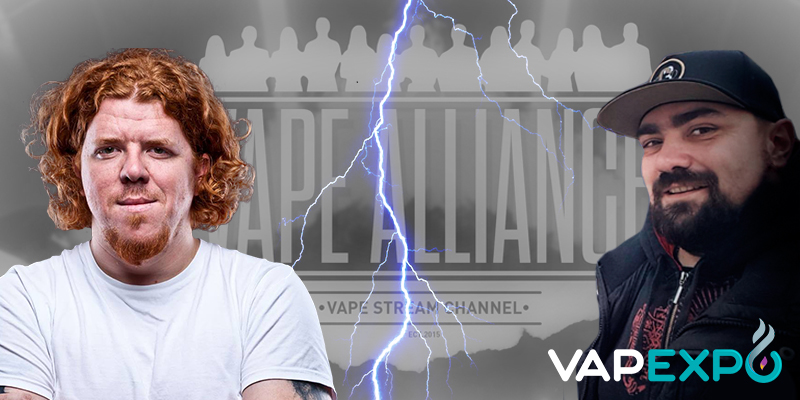 Alibi (Ukrainian female pop band - Translator's note) songs hundreds of times, tears, and e-juices with a taste of cookies: this is how Mihey Medvedev has survived his day without Vape Alliance. On April 14, the reputed vape blogger failed to join VAPEXPO Kiev 2018, and the other vape community legend – Stas Vapor Place – became the voice of the event instead of him.

He stated that Mihey messed up streaming and was drummed out of Vape Alliance. Therefore, he was absent at the event, in other words remained at home, experiencing pain and insult.        On the second day, Mihey, exiled like Kovu from Simba’s Pride, suddenly appeared at VAPEXPO Kiev 2018. We conducted a real investigation, questioned both parties, and found out how the day without Alliance looked like, and what Mihey had to do in order to return.

Hello, Mihey! Tell us please what it feels like to be beyond Vape Alliance.
Yesterday, I begged Stas for forgiveness until midnight and we agreed upon my probation period for a month. The decision will be accepted when Alex (famous vape blogger Alex from VapersMD - Author's note) returns from China.

What did you have to do in order to get the probation period?
I wouldn’t like to talk about this. I will discuss this issue only with my psychologist and will show the situation happened in the room using Teddy bears.

What e-juice did you vape in the hour of despair and sadness?
A lot of people eat sweets to overcome their grief. I did the same – only cookies. I put on 4 kg in a single day. I ate ice-cream with fingers. I took a shower and listened to the Alibi band, which was so close to me. Then, I went a bit mad and listened to Pharaoh (Russian rapper - Author's note).

How exactly did you mess up streaming?
I just didn’t tell Stas that he was handsome. I should have said this five times during streaming but I said only four times. So, it was the reason. However, I have already said this phrase four times at the event. And I’ll tell this for the fifth time. I should also finish my work for the first day of VAPEXPO.

Why did you exile Mihey from Vape Alliance?
He received a good deal of money for the review and had to share it. But he took away all the money and was exiled. Our policy is the following: everyone should give a kickback in the collective fund.

Mihey said that you provided him with the probation period and, perhaps, would allow him to return…
It will depend on the sum he will bring.

Is there anything else that he should do?
No, it’s an internal policy. We’ve signed a nondisclosure agreement, thus I can’t tell how he will work off this debt. One of the working off ways is to put a required sum for his screwup.

Please be honest, did you need him that day?
No, I didn’t. He could be too active like on the second day of VAPEXPO Kiev 2018.

P. S. Obviously, all of this is a prank in keeping with the best traditions of vape community top stars. No one is exiled. Stas just took a creative approach to describe the reason for Mihey’s absence on the first day of the event. The guys have a good sense of humor. Therefore, they played into our hands and gave a joky interview.

Keep following the news of VAPEXPO Kiev 2018 and you will be able to enjoy real interviews with contest winners, chief editor of the first printed vaping magazine, and exhibitors.