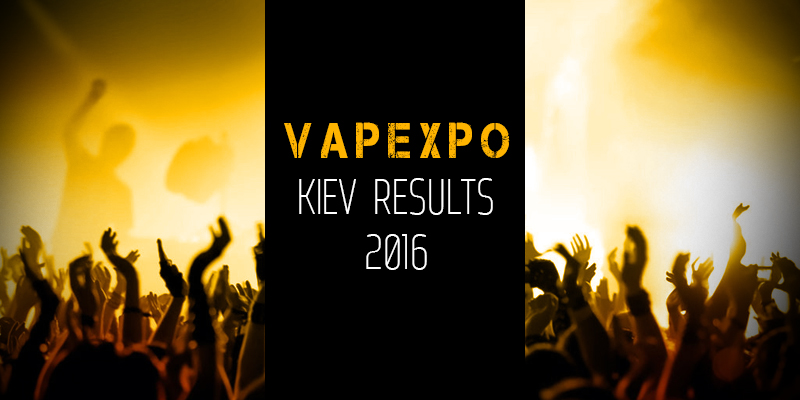 On October 1-2 ACCO International hosted the second international vape industry exhibition – VAPEXPO Kiev-2016. Metropolitan vapers, as well as admirers of tasty vapour from all over Ukraine, gathered together to test modern devices, try new e-liquids and enjoy a spectacular show.

The first Ukrainian industry conference for business owners was held on the first exhibition day. Reports were presented by market experts:

We have saved speakers’ presentations to keep you abreast of the situation in the market. They can be downloaded here.

Representatives of 55 Ukrainian and world companies attended the exhibition, they handed out eJuices for trial purposes and allowed testing their best products.

Manufacturers presented lines of American, Polish and local eLiquids for trial purposes. Vapour fans highly evaluated the quality of some domestically produced eJuices. And the company Wick&Wire won the award in the nomination “The best flavour of the year”.

The main outcome of the event was a huge cloud, which was simultaneously blown out by 132 exhibition visitors. Expert of the National Register of Records of Ukraine Vitaliy Zorin registered the first record on the territory of the country, made using electronic inhalers.

“The more such records in Ukraine, the fewer people will smoke “incorrect” cigarettes,” said expert.

DJ Mukvik grooved the main vape gathering of the capital with nice sets and offered to test a wide line of eLiquids of his own making – Monster Flavor.

A vivid and intensive show was held on the stage. All volunteers could participate in the Cloud contest and win valuable prizes from event sponsors.

Such companies as EcoVan Vape, Monster flavor, Wick&Wire, Tapvape, and others were throwing prizes into hands of the viewers, standing near the stage. Afterwards, girls were competing for UAH 5000 prize in the Twerk Battle and boosted spirits of the public.

There were also useful workshops on vape tricks and coil building on the stage, as well as Body Art contests, where young girls acted as models.

Boys gladdened the audience with brilliant vape tricks and held a workshop for everyone who wanted to learn making vape feints.

Unscheduled zest of the show program became a moving marriage proposal… May the new couple’s love be as sweet and delicious as a newly opened eLiquid bottle from the favourite manufacturer, and as hot as a coil warmed to the max.

Thanks to the organizer of VAPEXPO Kiev-2016 – Smile-Expo Company – the event has become a pleasant tradition for both – business representatives and ordinary admirers of tasty vapour. VAPEXPO exhibitions provide an opportunity to monitor the market growth and keep abreast of the latest events of vape industry.

As the saying goes, seeing is believing, therefore, we prepared a detailed video and photo report specially for you. Enjoy!

We look forward to meeting you at the next VAPEXPO!