Interview with representative of Wick&Wire at Ukrainian Vape Week 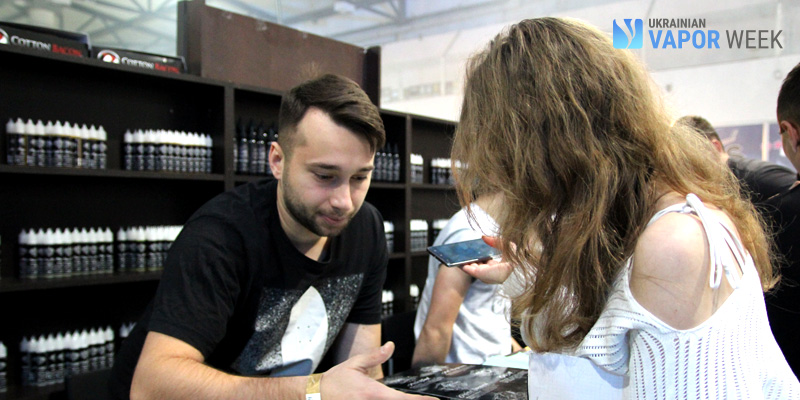 November 12 and 13 were the tastiest days of the month. It can be confirmed by anyone who attended a super vaping hangout Ukrainian Vape Week. It featured an abundance of eJuices and vapor clouds thanks to the huge number of manufacturers that participated in the event. Among exhibitors and sponsors of the event was the leading Ukrainian e-liquid brand Wick&Wire. We were at their booth, talked to the company representative Anton and made a review of the whole line.

UVW: Anton, will you please tell us what flavor of the line enjoys the most of popularity among customers?

A.: Frankly speaking, it’s difficult to choose one flavor. All six flavors are in great demand. I will note that they are dessert flavors. Personally I would mark Frozen Forest – sweet forest berries with wild mint. Then goes Coco Tob – a tobacco e-liquid with spicy accents. And then goes the following set: Exotic Charms – melon and mango, Arctic Black – various sorts of currant, Custard Vanguard – peach and apricot cream, and Apple Suspicious – apple. There are also two new flavors in our line: Mystic Donut – doughnut with almond crumb, and 7 – lemon pie. We hope that soon they will outperform our favorites.

UVW: Is it difficult to compete with American premium e-liquids?

А.: Hard to tell. Americans have other taste preferences, and when compared, it turns out that their flavor blends differ from our variants.

UVW: And what about competition with local manufacturers?

UVW: What do you think, why customers love your brand?

А.: I think because we don’t have simple flavors. Local companies include few ingredients in their e-liquids. We, on the contrary, use a lot of aromas from various foreign manufacturers. I can safely say that our blends are unique.

UVW: Anton, do you attend such an exhibition for the first time?

А.: No, Wick&Wire attended other VAPEXPO events. In fact, we try not to miss your exhibitions.

UVW: Thanks a lot for the interview. We wish success to your company.

Wick&Wire was a sponsor of the Biggest Cloud men’s (up 80 kg) category in the cloud chasing tournament The World Series of Vaping, which took place for the first time in Ukraine, as well as a sponsor of lanyards and warm greeting. Their eJuices were given out from the stage of VapeWeek as presents.

Try the whole range of flavors from the leading world brands at the upcoming vape event that will be the last for this year – VAPEXPO Moscow 2016, scheduled for December 9-10. Just register for participation.