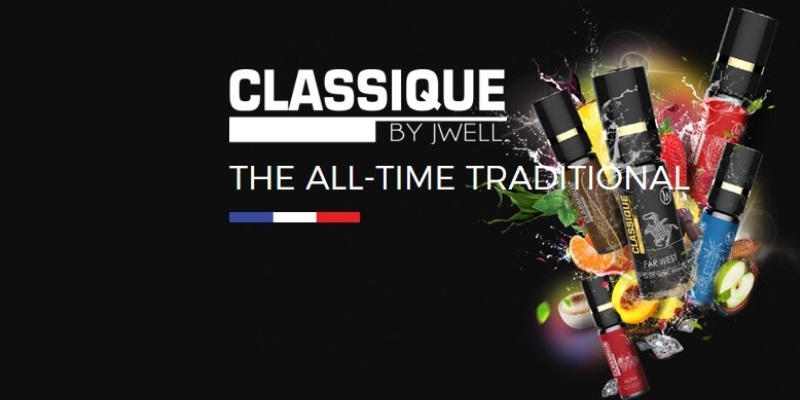 French company JWell constantly participates in the international exhibitions VAPEXPO by Smile-Expo. We wrote a review of their marvelous mixtures after Ukrainian Vapor Week took place (November 12-13, 2016). On March 4-5, 2017, they presented products at VAPEXPO Kiev 2017, and we were lucky to test two more impressive flavors. We hasten to share impressions with our readers.

This time, we received bottles from the CLASSIQUE collection. In its turn, it’s subdivided into three sub-collections: Tobacco, Fruits, and Delicious. We received several samples of the latter, which includes 14 flavors.

“The all-time traditional” is the line’s motto. It is highlighted by a modest label, featuring the e-liquid’s name and collection, to which it belongs.

There are 10 ml bottles available with a nicotine concentration of 0; 8; 16 mg.

We won’t intrigue you anymore and will talk about the most important thing now – the impressions of our tests.

It’s a mild, sweet flavor that reminds of Hubba Bubba Cola gum rather than a drink, which is cool. When you exhale, it feels very fresh. It’s a long-playing e-liquid with a pleasant aftertaste. We would also like to note the super tempting aroma, which brought COLA LALALA a higher position in our ranking.

It’s a fresh summer flavor of a popular drink. There are distinct notes of mint, which has a slightly sour taste. It tickles your throat a little bit, creating the soda effect, everything like in real mojito.

We should pay tribute to JWell’s modesty – their product descriptions are short and contain few metaphors so that consumers won’t have exceeded expectations. On the contrary, they will be pleasantly surprised with the fineness and richness of flavors. We are sure that the whole line possesses such characteristics and highly recommend you to try it. By the way, JWell will be an exhibitor at VAPEXPO Moscow 2017 (June 16-18). Buy a ticket and form your own estimate.