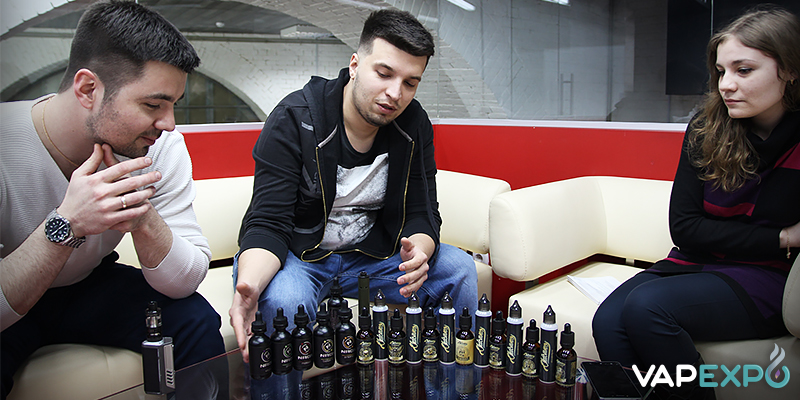 The Ukrainian vape market is full of various e-liquids of any flavors, volumes and ingredients. An ordinary person can simply get lost in such a flood of goods. However, all customers are similar in terms of one aspect: they prefer quality. VAPEXPO was visited by representatives of ChicanoFamily alliance, the manufacturer of e-liquids, which quality raised doubts of none customers. Rufat and Sergey told us how they managed to reach such a result and why vapers gave their hearts to this brand.

D.K.: How did you acquaint yourselves with vaping?

Rufat: It happened thanks to our friends. We tried, liked and thought of creating our own new flavors. It is this way that we have come up with an idea to produce e-liquids.

D.K.: Currently, your line includes 7 flavors, does it?

Rufat: Now Chicano line has seven flavors. Soon, the new premium line called NAOS will enter the market. Brand new tastes based on other flavoring agents. They will be sold in 60 ml glass bottles.

D.K.: What flavor of Chicano line is the most popular?

Rufat: I suppose it is Anastasia.

D.K.: And which flavor was the first one?

Rufat: Five flavors simultaneously entered the market. A bit later, they were followed by another two flavors – Seven and Aphrodite. Then we got acquainted with guys from NAOS. Initially, it was two different companies – NAOS and Chicano, but we decided to join our efforts and to work under one ChicanoFamily brand.

D.K.: What was the reason for such a decision?

Sergey: We realized that we could really help each other both in the brand promotion and with other resources. We have a lot of competitors. It is better to be friends rather than competitors.

Rufat: By the time of NAOS development, Chicano has already had its production and fundamental base: e-liquid certification, findings by the Ministry of Health Care, etc. Everything was already documented and we decided to join efforts in order not to go through certification once again.

Sergey: By the way, it is serious production and full documentation that set us apart from competitors.

D.K.: How did you create names of brands?

Rufat: We were thinking two seconds. When I developed e-liquids, I didn’t consider a name issue. And when the time was due, we had no time think hard.

Sergey: And we did think hard. The whole NAOS line is names of stars and NAOS including. We uploaded the list of named stars, pronounced each name, and even checked the color of the star.

D.K.: How do you test products before bringing them to the market?

Rufat: Obviously, we first taste them. We mix, for example, 30 options. Experiment with proportions. Than vape and determine what should be added and removed. Then ask friends to taste. Eventually, come to a single option and issue new flavor.

Rufat: Indeed. We also rely on customers’ opinions and demands. A lot of people came to our stand at VAPEXPO Kiev 2016. Some of them enquired for flavors we did not have. So, it resulted in tobacco Seven.

D.K.: Whose components do you use in your e-liquids?

Rufat: And package from China. Both our and foreign manufacturers order packages from China and components mostly from the USA.

D.K.: You will participate in VAPEXPO. Are you preparing any surprises for the exhibition?

Sergey: It is VAPEXPO where we will officially present the new NAOS line. And what is more, the price is always a great surprise…

Rufat: … for competitors (laughing – D.K.). And for attendees – we will organize scattering of e-juices from the stage. But we are not going to throw the glass to guests. We have specially ordered a batch of blisters for throwing (smiling – D.K.).

D.K.: And what do you expect from the exhibition?

Rufat: Satisfied guests. Besides, thanks to Smile-Expo, the organizer of vape exhibitions, Chicano attended VAPEXPO in Moscow. We hope to hold more drawings along with your company.

D.K.: And finally: what would you like to wish our readers?

Sergey: Do not smoke but vape. And what a worth vaping at all is worth vaping our e-liquids (laughing – D.K.).

P. S. Guys have their own vape shop and official website. Get acquainted with the brand and register for VAPEXPO Kiev 2017 in order to taste quality flavors.