DJ Mukvik: «There is no difference between Ukraine and the USA» 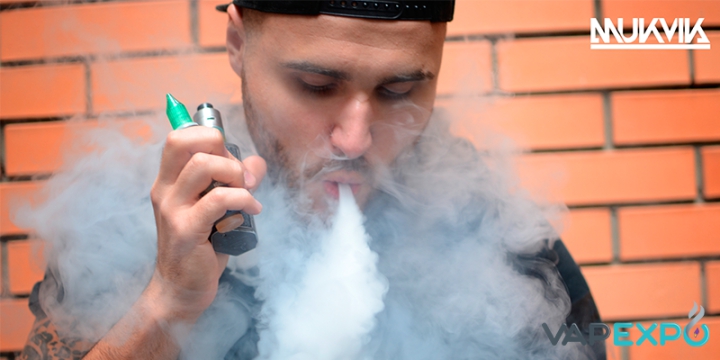 Not a single VAPEXPO in Kyiv is held without Roman Mukvik: DJ Mukvik is the one whose solid sets shake main vape-parties of the capital treating people with a wide range of own-produced e-liquids – Monster Flavor. That’s why we couldn’t resist and asked Roman to find some time to talk to our press service.

Despite of his tight day and night schedules and his trips abroad we still got a chance for a conversation. Surely we talked about vaping. So let’s get started.

VAPEXPO: When was the first time you tried an electronic cigarette?

DJ: First time was about a year ago. I bought eGo or something else, not sure, that cost me 460 UAH, but it turned out to be complete rubbish. Then went for more expensive stuff (hoped for better flavour) – same story. Later I noticed my friend using much more sophisticated device having screen and “brains”. Tried it and liked it a lot! I found out where they were selling it and it was basically the only vapeshop back then in Kiev so I went there the same day and bought it.

VAPEXPO: Which device are you using now?

DJ: A friend gave me Triada DNA 200 for my birthday. DNA board, 3 batteries – everything works fine and the battery charge is enough for 3 days. I got a lot of tanks: Avocado, Limitless, Griffin 25. Currently I’m using Avocado flavored RDTA and it tastes good. As for tanks, I’ve chosen Griffin 25 – it turned out to be perfect for me.

VAPEXPO: Do you often advertise vaping?

DJ: Not really, people come up themselves and ask: “What is it? How does it work?” I’m explaining them that there are liquids, devices, you can make vapor and eventually quit smoking. I won’t approach people on streets telling them to quit smoking and change for vaping but I’m kind of promoting it among smokers that I know.

VAPEXPO: Why did you decide to make business in the vaping field?

DJ: I started vaping, giving my friends a try, it was someone’s liquid, not mine. Everyone liked it. Then I once mentioned that I should make my own liquid. So I ordered flavoring, propylene glycol, glycerin, and started mixing and trying it. People started liking it. Then I got in touch with Denis and suggested to run a startup – and here we go!

VAPEXPO: What was the first liquid you’ve made and how much did it take to create a new product line?

DJ: It was Dr. Pepper. Initially there were 11 flavors. Now we have expanded the range up to 29 by adding 4 “tea” flavors.

VAPEXPO: Were there any difficulties while creating your own line?

DJ: There were difficulties with the delivery of flavoring and jars from China. It really takes a long time. For instance, it takes them a week to process an order. Or, a week after my payment I suddenly receive a message that they somehow missed it. Then money gets blocked and refunding routine starts. And the thing is that we can’t buy such jars here, they are just not available in Ukraine.

VAPEXPO: What is special about Monster Flavor line?

DJ: In terms of quality and ingredients our liquids are exactly the same as in the USA.

For our business concept we have chosen a Vape Wild policy. We adopted it and keep doing exactly the same stuff.

We conducted some experiments and watched a lot of videos. Besides, our friend who lives in Canada visited their plant and sent us a lot of interesting photos. We checked them and basically implemented exactly the same strategy for ourselves.

It took us 4 months to create 29 flavors. Basically we have things that no one else has, but still classical flavors may be found in our product line as well. For example, everyone has strawberry with cream and we are not an exception (“Bunister”). Still no one has such flavor as Dr. Pepper. Same goes for our “tea”.

VAPEXPO: How long does it take you to create a new flavor?

DJ: One recipe takes us about a month and a half. Bunister took about 2 months though. We are used to develop 10 flavors simultaneously.

We removed “Premium liquid” from all old labels and replaced it with “Monster lab”. We believe that the word “Premium” has to be earned first as it’s quite a serious thing.

It’s just that when we were starting, we followed the trend and used the same words. But in this case there will be no difference between us and America. We import all flavors from there and the boxing comes from China. The only difference is in the production. That’s it. Then why we are not considered as premium?

VAPEXPO: Have you got anything new for Ukrainian vapers?

DJ: We have prepared new sizes for sale. All our current flavors have 30 ml capacity and we are going for 120 ml and all that for an attractive price.

We are also going to release 4 “tea” flavors: mango, Earl-Grey, jasmine and the fruit one. They will be supplied in tubes, but for now it’s a huge secret. They’ll go on open sale on October 25.

VAPEXPO: What would be your recommendations for young startups?

DJ: I can only wish them patience and to have the most responsible working approach because it basically takes all of your time. Don’t give up!

Liquids of these guys are well known all over Ukraine. That’s why if you haven’t tried their Monster Flavor stuff then you definitely should.